Are You Looking For That Perfect Entertainment For Your Residents and Staff?

How About Bringing In One Of Earl Long’s Entertaining Shows?

“He interacted wonderfully with our senior adult participants and our staff. Everyone loved it and we had so much fun.”

If you’re looking for the perfect program to not only entertain, but to engage your residents, staff and participants…

Something that appeals to all ages, a program that will absolutely dazzle, delight and encourages your group and most importantly will get them involved…

One that is easy for you and will also be extremely entertaining, filled with music, magic and storytelling, then the following information is for you! Please Keep Reading Below.

What Others Have Said

“We had the entertainment of Earl and Kimberly Long come to our facility. They really engaged our residents. One of our residents does not talk or communicate much. Earl used her in one of his tricks and she actually talked to him, gave him her name and did the trick. It seemed that it uplifted her and she engaged with him. The staff and I were really amazed at her. It was a great show and we will be having Earl back.

“Earl was very encouraging to our patients. He interacted with them. They were stimulated and engaged by his performance. I would highly recommend having Earl Long to do any of his shows for your patients and employees”

Earl came in to perform during our Circus Theme Week. He did magic, juggling and other fun activities. He interacted wonderfully with our senior adult participants and our staff. Everyone loved it and we had so much fun. I encourage you to have him come to your facility.

“Earl and Kimberly Long have been to our senior home 3 times in the past 6 months. They have brought enormous joy to our residents with lots of laughter, magic, juggling, puppets, balloon twisting and lots of interaction with the residents and staff. I strongly encourage you to bring them in if you would like a lot of laughter and joy brought into the lives of the elderly. Their programs are great for the young, the old and anyone in between.”

We booked Earl and Kimberly on a recent Premier Christian Cruise.  What a delight they were!  Everyone was entertained.  I recommend every church or organization to take a serious look at Earl and Kimberly Long.

We have several shows we can offer your facility. They range from Holiday Themed Shows, Seasonal Themed Shows, and Comedy Magic Shows. We also can provide entertainment for any festivals or parties by performing balloon twisting, magic, and juggling.

For a festival or carnival atmosphere, we can perform close up magic, juggling and make balloon twisting creations for your residence and guests. We will also bring along juggling items for your guests to try out and learn. These include juggling balls, rings, juggling flower sticks, Chinese yo yos and plate spinning.   Then if you choose, we can perform a full stage entertainment show that includes comedy magic, balloon twisting, audience participation, music and other amazing elements that will keep your audience on the edge of their seats.

The Spring Into Magic Show incorporates many things that are coming to life in the Spring; including blooming flowers, caterpillars turning into butterflies, a paper butterfly flying around magically, rabbit tricks (not live rabbits), an appearance with Petey our rabbit puppet and many more fun and amazing audience participation tricks.

The Spooky Goofy Magic Show is themed around Halloween, but not scary. It is perfect for any age. This show is filled with a lot of audience participation, comedy, music, stories and lots of magic.   Come with us as we explore an old haunted castle to try to find the treasure. Your staff and residents will giggle and laugh as they meet Mr. Bones who keeps falling apart, he loses his head but then it reappears. Our friend Jack the Great Pumpkin will make an appearance and produce a big surprise. In one of the rooms of the castle, the audience will see a table float in the air and in another room a treasure box appears out of an empty box.   Check out the video below to see a preview of this show. Click on the video below. 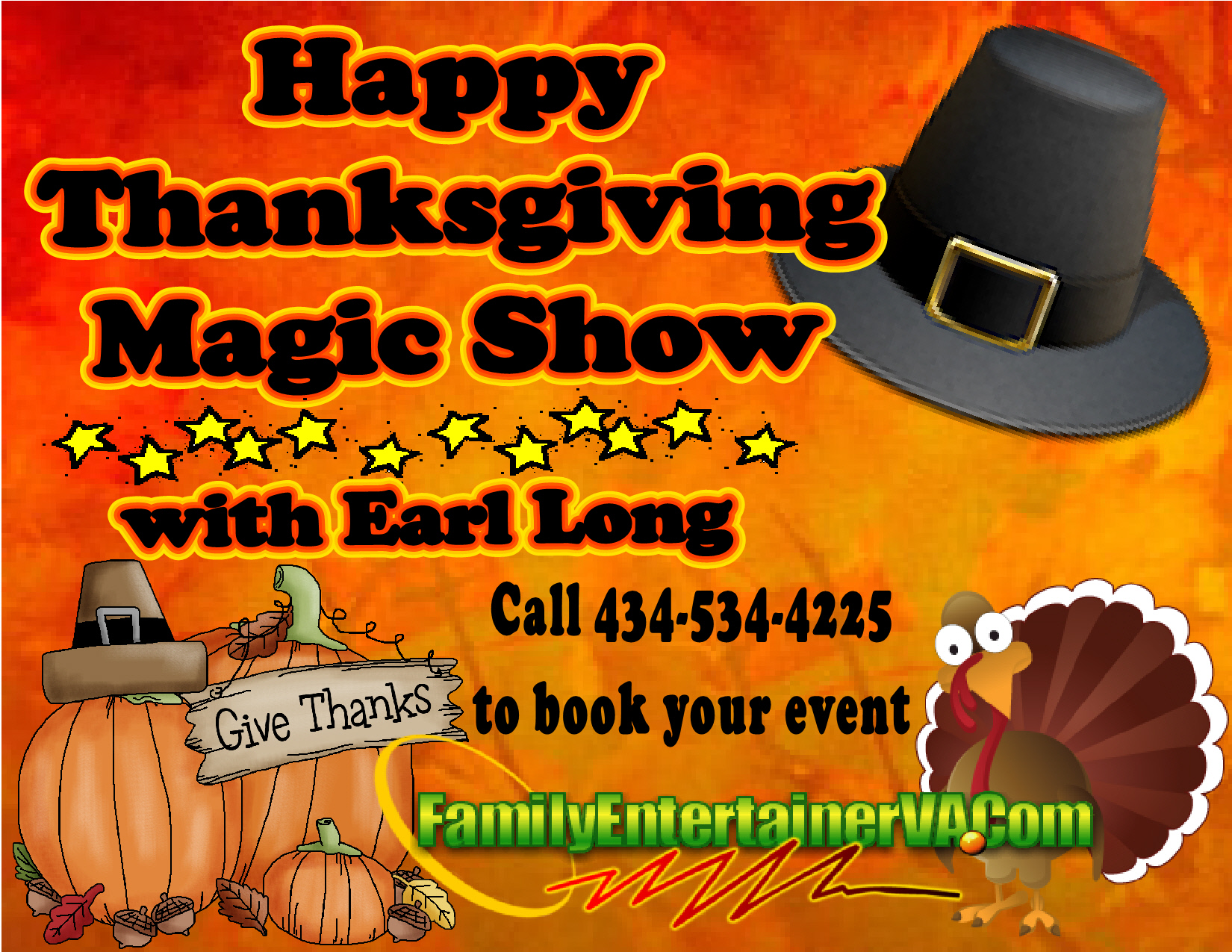 The Give Thanks – Thanksgiving Show is a delightfully entertaining event where we have fun talking about things we are thankful for by using magical storytelling, comedy, audience participation and juggling. The history of Thanksgiving will be seen through dazzling effects of magic and illusions. We bring everything including backdrops, props, music and entertainment for a whole hour. 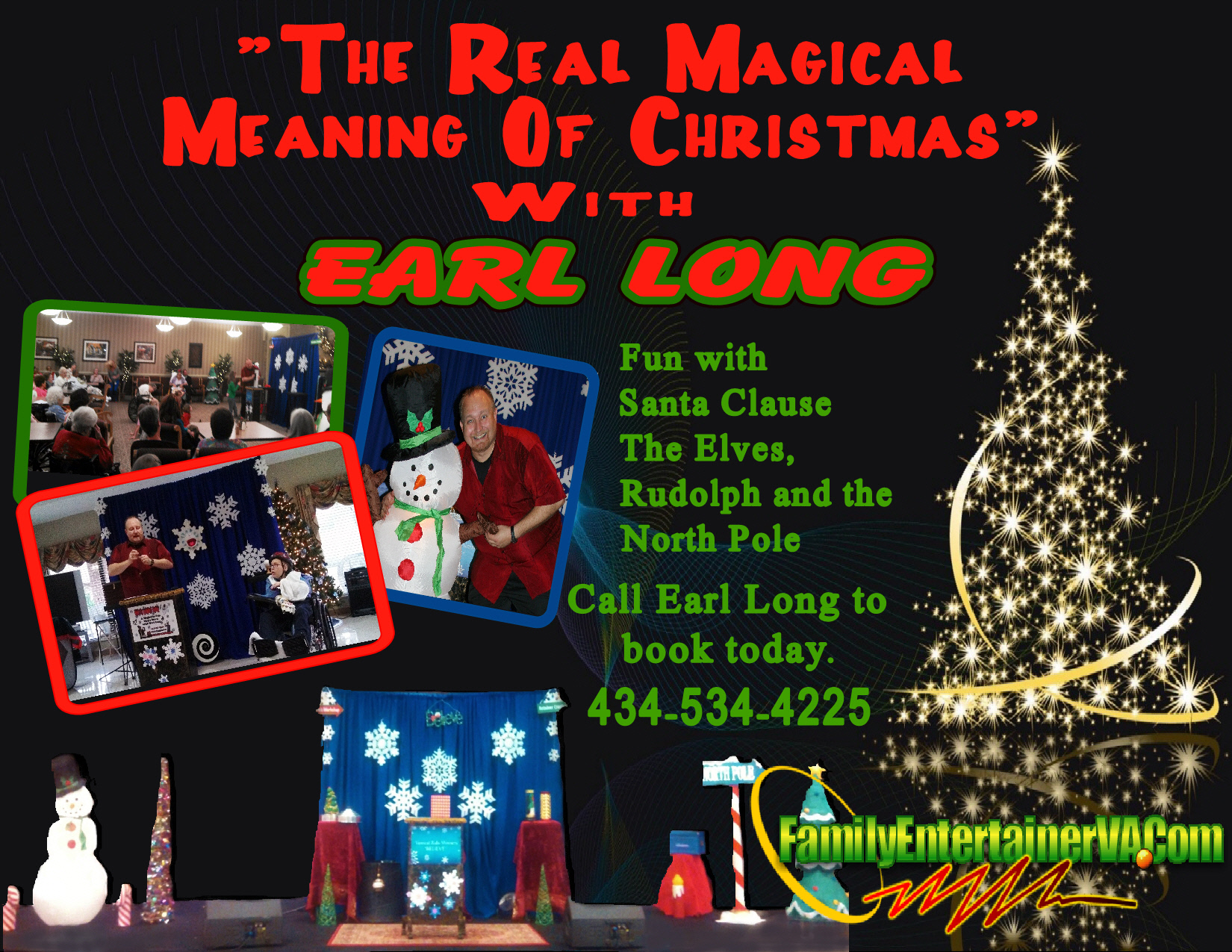 The Real Magical Meaning of Christmas Show is a 1-hour show that features a delightful use of tubes, boxes, cards, ropes, chains, colorful scarves, puppets and Christmas music to incorporate fun magical stories about Santa Clause, the North Pole, Rudolph The Red Nosed Reindeer and Santa’s Elves. As the show continues, using lots of audience participation and humor, we watch Earl draw a picture of Santa on a dry erase board and then the drawing comes alive. The spectacular show will end with Earl magically creating snow right in front of everyone’s eyes. The use of dazzling effects of magic and illusion will defiantly get your audience in the spirit of the holidays. We come in with backdrops, holiday decorations, magical props, music and lots of entertainment. It is truly a magical event. 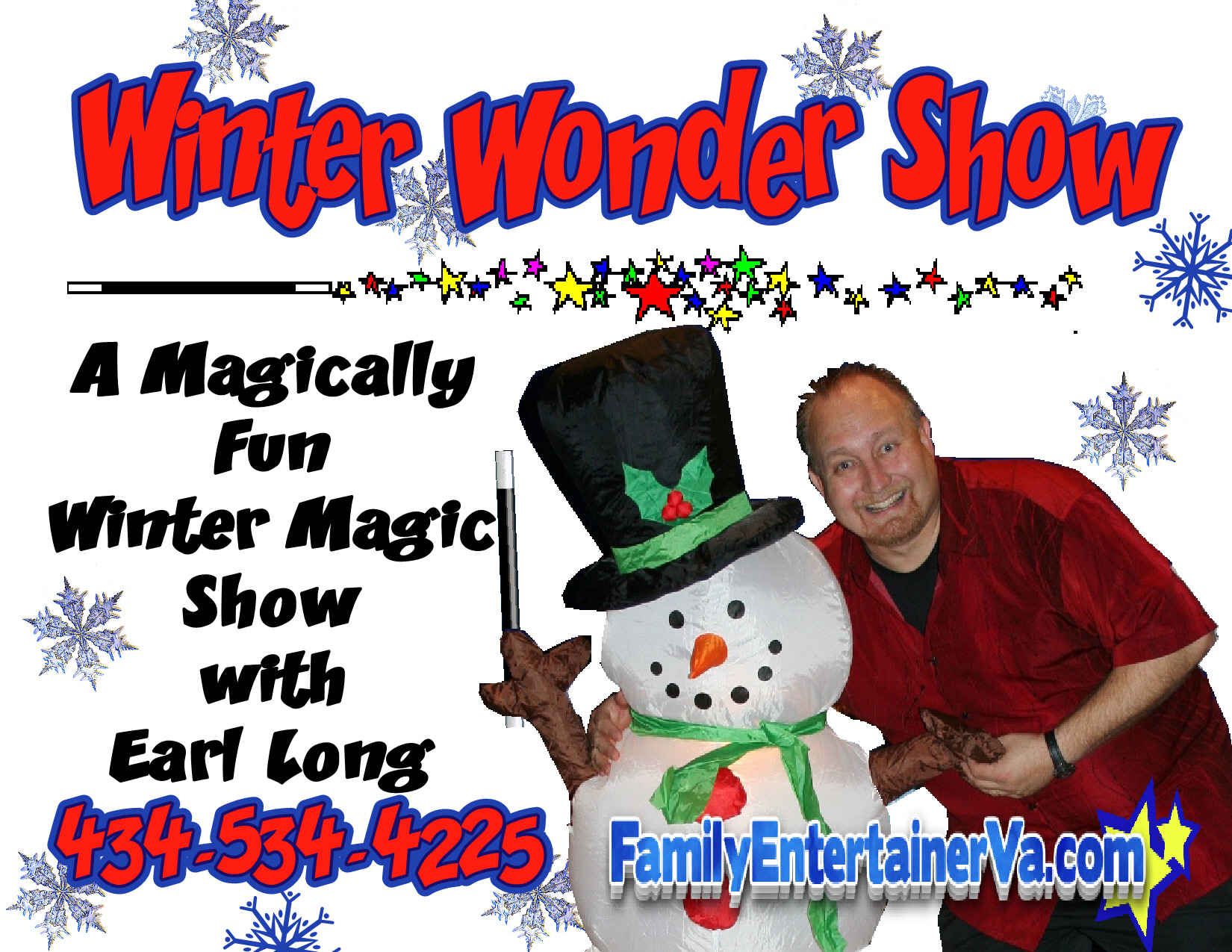 The Winter Wonder Show features Frosty The Snowman puppet who appears out of an empty box then starts a comedy routine of trying to sing a winter song but keeps messing up. The audience will also see a snowball float in the air and then it disappears. The show includes lots of music, stories and illusions specially designed to interact and get the audience involved. There are many colorful and visual routines which use audience participation and will keep everyone personally involved for 60 minutes.